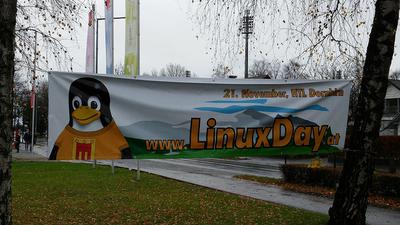 On November 21st, the Linux User Group Vorarlberg organized the 17th LinuxDay in Dornbirn, Austria. It took place at the Höhere Technischen Lehranstalt (HTL) Dornbirn and attracted several hundred attendees from the so called "DACH" Region (Germany, Austria and Switzerland).

The schedule consisted of more than 20 separate lectures (presented in German), that were held in three parallel tracks.

Additionally, there was an opportunity to submit 10-minute lightning talks that were held between 1pm-2pm.

I decided to give a spontaneuous lightning talk about the Sync & Share tool Syncthing, as I was chatting about it with an attendee during one of the crypto related sessions. I really like SyncThing as a free alternative to BitTorrent Sync. I did not prepare any slides in advance, so I just scribbled down a few bullet points on my Nexus 7 tablet. Interestingly, nobody in the audience had heard about SyncThing before, so it was nice to give them some inspiration.

My talk about openATTIC took place at 3pm in the biggest conference room 3. By my estimate, there were about 25-30 attendees. I forgot to bring my wireless presenter, but fortunately Dirk Deimeke (another speaker) was kind enough to lend me his. As I prefer to roam the stage during presentations, I appreciated that I was not bound to the laptop for advancing my slides. The presentation went quite well and there were some interesting questions at the end. Hopefully some of the attendees will give openATTIC a try and show up on our mailing list or #openattic IRC channel to share their impressions!

The rest of the day I attended other sessions that sparked my interest, here are my impressions and takeaways:

Kommunizieren mit Privatsphäre by Manuel Wiesinger: the session abstract sounded interesting, but the delivery left me somewhat disappointed. Because of lots of technical issues related to getting his screen output directed to the projector, Manuel only made it through a subset of his presentation. It was somewhat disheartening to realize that connecting Linux laptops to projectors can still be an issue in 2015.

Einführung in OpenPGP - Schlüssel, Vertrauen und das Web of Trust by Jens Erat provided a well-rounded introduction into PGP and the principles behind it (encryption methods, web of trust). He concluded the presentation with a list of useful tools and utilities. Unfortunately I did not get around to get his take on keybase.io, which in my opinion is an ideal alternative to traditional key signing parties.

Zeit- und Selbstmanagement by Dirk Deimeke: while it was a rather "soft" topic for such an event, Dirk provided a very nice collection of useful hints and suggestions on how to improve one's time management and self-organizational skills. Not surprisingly, smartphones were identified as a key distraction factor and the question was raised if they are more of a productivity killer than a useful tool. Some attendees also shared their experiences and best practices, which turned this session into a very insightful conversation. Dirk finished his talk with an introduction to several Open Source tools that might be useful in this context, but in the end it's usually up to an individual to find the best method and tools to get organized and structured.

Systemd - ein Init-System für Linux - Stefan G. Weichinger: Stefan gave an excellent overview over the features and functionality provided by systemd. Unfortunately, he could not finish his presentation as there were many questions and comments by the attendees which lead to some intensive and lengthy discussions about the pros and cons of systemd. This topic obviously still polarizes the Linux community, with strong supporters in both camps. At this point I would have liked the speaker or moderator to jump in to postpone the ongoing discussions until after the presentation. Nevertheless, this talk was quite informative and I learned a few more things about systemd that I wasn't aware of before.

TDD - Test gestützte Programmierung mit Python 3 by Paul Jaros. In this talk, Paul gave a gentle introduction into the topic of "Unit Testing", using simple Python code examples. He explained why automated tests are important and why they need to be simple to create and quick to perform. He also outlined many common problems that can occur during automated testing and finally introduced Python's PyUnit unit testing framework as the solution. I especially liked how a developer can use mock to emulate the behaviour of existing functions or objects, e.g. to simulate writing to a file. Paul finished his session relatively quickly, so another participant offered to give a quick lightning talk about the pytest testing tool as an alternative, which seemed to spur more interest by the attendees. PyUnit's syntax closely resembles the unit test framework used by Java and tests tend to become quite lenghty and complicated because of that. Pytest convinved me with its simplicity and flexibility, which was demonstrated live by several examples.

Ein Bild sagt mehr als 1000 Zahlen by Harald König. Harald is a long-time guest speaker at LinuxDay, and his presentations are usually the closing highlight of the day. After a short basic introduction to Gnuplot, the majority of his session consisted of a live hacking session, in which Harald created many graphs of increasing complexity, to introduce the usage of the Gnuplot command line. It was quite impressive to see, how Gnuplot is capable of quickly converting otherwise "dry" numbers into nice looking visuals with very little effort.

The LinuxDay concluded with a joint dinner. Titled "Käsknöpfleparty", this event traditionally takes place in the restaurant "Bierlokal" in the city center of Dornbirn. The food was delicious and many more hours were spent with interesting discussions and conversations about Linux, Open Source an many other topics.

I truly enjoyed my stay, learned a lot and met many interesting people. So even if the travel from Hamburg to Dornbirn was somewhat of an ordeal, it was worth it! I look forward to next year.