A bit over a month ago, I posted about a few new Ceph management features that we have been working on in openATTIC 3.x after we finished refactoring the code base.

These have been merged into the trunk in the meanwhile, and the team has started working on additional features. In this post, I'd like to give you an update on the latest developments and share some screen shots with you.

The management and configuration of iSCSI targets (OP-775) was released in oA 3.0.0. This feature uses Ceph RADOS block devices (RBDs) as the backing store and lrbd for the target configuration on the remote iSCSI storage nodes; which in turn is orchestrated by our Salt-based Ceph deployment and configuration framework DeepSea. This way, openATTIC is now capable of managing iSCSI targets on multiple nodes, supporting a wide range of features and authentication methods. 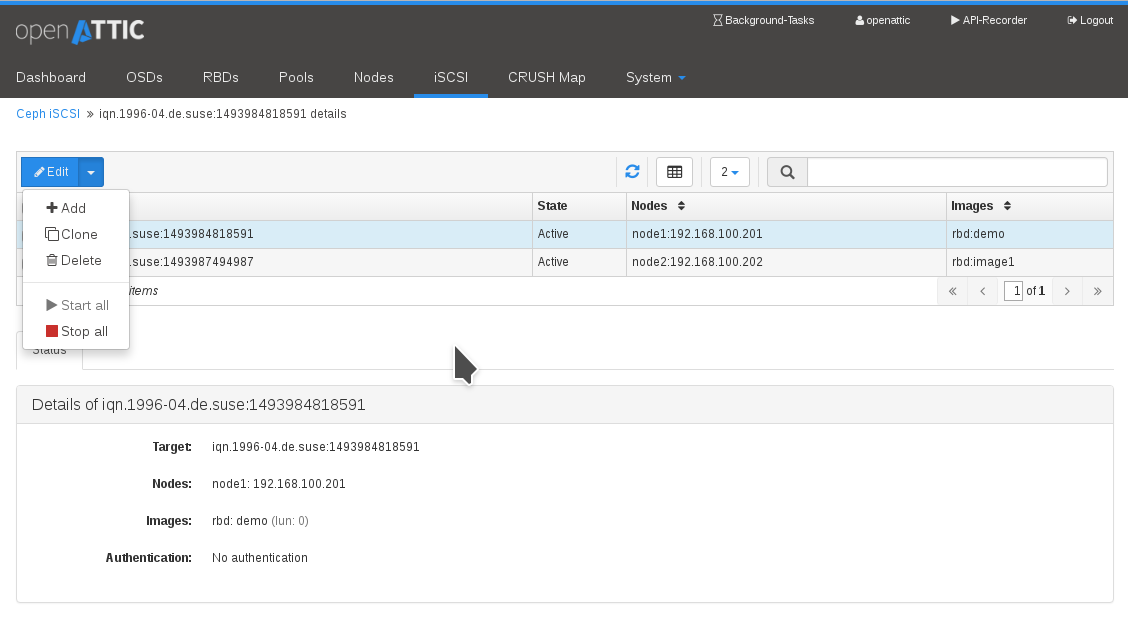 While openATTIC 2.x had to be installed on the same node on which the Salt master resided, this limitation has now been lifted in version 3.x - openATTIC now uses the Salt REST API to communicate with the Salt master instead. The Salt management code in the openATTIC backend was refactored accordingly to support this.

The Ceph Object Gateway (aka RADOS Gateway/RGW) is an object store compatible with the Amazon S3 and OpenStack Swift protocol. It uses the Ceph cluster as its storage backend.

RGW maintains it's own user database that manages the user accounts, their privileges, quotas and access keys. 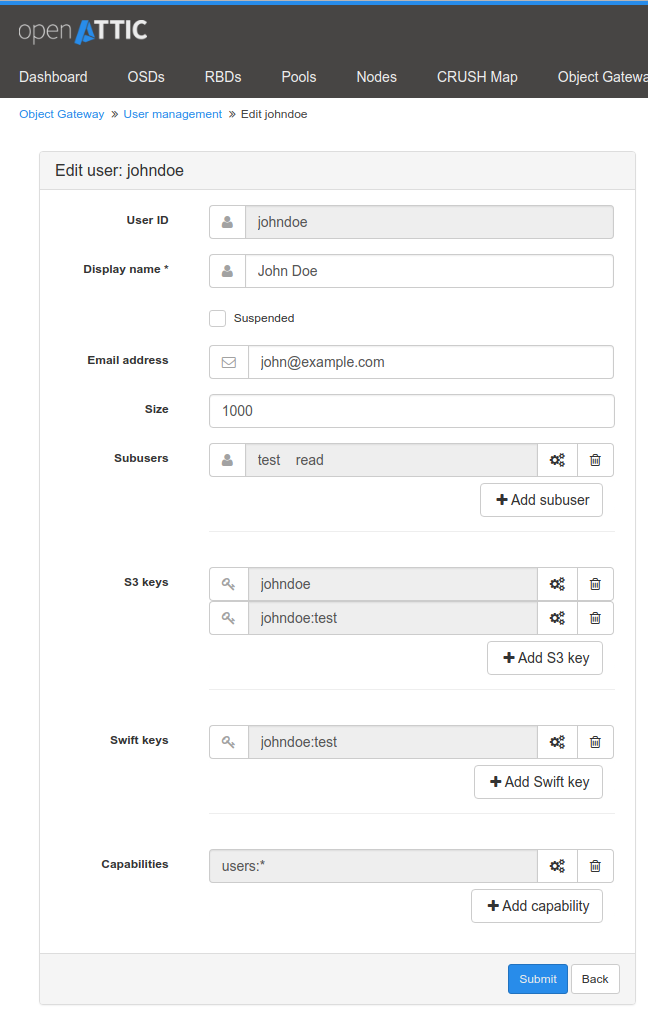 We added initial RADOS Gateway user and key management support in openATTIC 3.1.0. User quota management (OP-766) landed in oA 3.1.1, managing a user's buckets is scheduled for the next release.

The openATTIC backend acts as a proxy between the the RGW Admin Ops API and the openATTIC web-based UI.

openATTIC 3.x added some additional functionality to the Ceph cluster dashboard, namely the addition of an OSD health widget (OP-1937) and a number of usability improvements to the main cluster health widget: it now provides more detailed insight into the cluster's health state. A widget to monitor the status of the Ceph MONs (OP-1933) is also nearing completion and will be added to the next release.

In addition to these built-in widgets, we're also working on integrating Prometheus for monitoring and Grafana for visualization of the various Ceph related data and information.

The oA UI also received some overall usablity enhancements. For example, it now displays a warning about unsaved changes in a form (OP-1732) and collects all recently displayed notifications, in case you have missed them (OP-1989). Both these enhancements were contributed by Tiago Melo (thank you!). 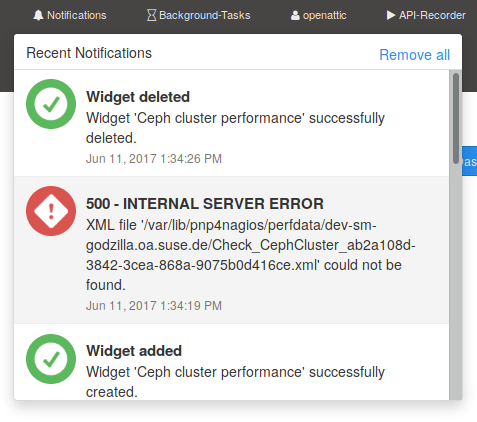 Currently, openATTIC 3.x is available in packaged form for openSUSE Leap via the filesystems:openATTIC:3.x/openattic package repository on the openSUSE Build Service. We plan to add packages for other distributions as well (e.g. CentOS, Debian/Ubuntu), this is work in progress and it also depends on the availability of DeepSea for these platforms (which is also work in progress). The DeepSea developers are also looking for more testers and feedback!

As usual, we appreciate any feedback or comments you might have - please get in touch with us!